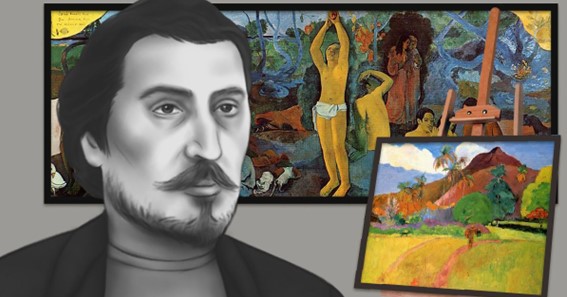 Paul Gauguin was an artist from the post Impressionism period. He was a fan of experimentation, and all his artworks speak of the same. So many colors, compositions, and artistic styles with special techniques describe the great artworks by Gauguin artist.

Those who think that Gauguin was just a painter gave this world a painting that cost millions of dollars. But then, there is a lot left to know about the Gauguin artist. From complicated relationships to influence on other artists, Gauguin’s biography entails many mysterious stories.

There are so many thrilling and awe-surprising facts that still need to be revealed about Paul Gauguin. Learn about Gauguin artist through the segment below that gives information about some unknown stories about him.

Don Marino Tristan Moscoso was the great grandfather of Paul Gauguin. He was from the noble Tristan Moscoso Spanish family established in Arequipa, Peru, in the 17th century. His future wife, Anne Pierre Laisney, was French-born.

When Don Marino was a station commander of Peruvian troops, he met Anne Pierre. But, the couple failed to file a proper marriage license, and as a result, their marriage was not accepted by the nobleman’s family.

The situation fell apart when he suddenly died in 1807, leaving behind his wife and two children without having any share of the eminent fortune. Laisney and her daughter (Gauguin’s grandmother) fought their entire lives to win legal rights to Don’s estate. However, all these efforts were unsuccessful.

During his childhood, Gauguin and his parents moved the family to Lima, Peru. There they were closer to Gauguin’s maternal relatives. Clovis, Gauguin’s father, was ambitious to open a magazine in Lima, but destiny had different plans. He died young during the voyage, and the family continued to live in Lima for five years.

Some of Paul Gauguin famous drawings were brought back to Paris by a contemporary artist, a dear friend, and his unpaid agent Paco Durio. He was a significant element that bridged Gauguin’s and Picasso’s aesthetics before arriving at Cubism.

Under his guidance, Picasso switched to ceramics and stone sculptures inspired by Gauguin. His interest in Gauguin’s work, as well as style, grew when he visited an exhibition at the Salons d’Automne in 1903 and 1906. They were all Gauguin masterpieces, including large and heavy sculptures of nude women with exaggerated features.

The appearance of these sculptures was very different from usual ones. They cast somewhat mask-like figures, which helped Picasso create the forms that appear in Les Demoiselles d’Avignon. They are even inspirations for Gauguin’s work coming from Pablo Picasso himself.

Professional Life as a Stockbroker

French painter Paul Gauguin was an intelligent and sharp man. When Gauguin was twenty-three, he was offered a job in the Paris Bourse that made him rise higher to gain financial success and power.

After eight years, he was earning 30,000 francs every year. Today, these 30,000 franks are equivalent to $150,000. He kept on doubling his salary in the art market. He continued his profession as a stockbroker for nearly 11 years, and painting was his side hobby.

When things turned upside down, and the stock market crashed in 1882, he cut off his ties with it. Instead, he became a full-time painter with his friends Camille Pissarro and Paul Cezanne.

There was something beyond usual between both the master artists. It was not rivalry, not friendship but a combination between Paul Gauguin and Vincent Van Gogh. Initially, both of them were like best friends and shared artistic interests. But then, a time happened when both lived under the same roof and worked together as a unit.

Things started to fumble when Gauguin was unable to cope with the changing behavior of Van Gogh. It is no doubt that Van Gogh was a person with unpredictable behavior and suffered from depression his entire life. Such effects of his behavior created a bump in their relationship.

Some instances suggest that Van Gogh even tried to hurt Gauguin by throwing a knife over him during a fight. This incident occurred shortly after the famous tale when Van Gogh cut off his ear. After that, both legendary artists parted ways and never corresponded with each other until Van Gogh died.

Gauguin Painted The Fourth Most Expensive Painting in the World

There is no question when it comes down to the artistic maneuvers of the painter Paul Gauguin. But, his artworks have a grandeur more than anyone can imagine. He never studied painting, and everything that he served through canvas was self-made.

In 1892, he painted Nafea Faa Ipoipo (When Will You Marry?) sold for $210 million in 2014. It was the second-most-expensive painting in the world at the time, behind Cézanne’s Card Players, and now the fourth on the list. Gauguin’s gaze and artistic style in his paintings made them a huge success.

However, Gauguin did not experience much attention and fame for his work. After his death, his work gained this much recognition and became the most expensive treasure in the world.

You can check painter Paul Gauguin’s artworks and creative talents online. These are amazing pieces of art that exist in art history today. Each one is a masterpiece over the other.

What is the Future of Cleaning Services?